A Toast to Ontario’s Crowning Glory

It’s very common that many of my friends envy me my home close to the Canadian side of the famous Niagara Falls. After all, it is the most well-known of the waterfalls with the maximum number of visitors and also the largest in North America. It is indeed an amazing sight to look at the gigantic sheet of water thundering down and splashing on the rocks below, often creating multiple rainbows. Located on the US-Canadian border, on the Niagara River, there are three waterfalls that make up Niagara Falls, namely the Horseshoe Falls, the American Falls, and the Bridal Veil Falls. Among these three, it is the Horseshoe Falls that takes the spotlight with a width of 2,600 feet (790 m) and a height of 173 feet (53 m).
Niagara Falls came into being 10,000 years ago when the ice melted after the Wisconsin glaciation and the water from the Great Lakes made its way through the Niagara River to the Atlantic Ocean, forming Niagara Falls on the way. Gradual erosion over the years has given the Falls its current shape. Geologists predict that, at this rate of erosion, the Falls will be nonexistent in 50,000 years. Compare the height of the people to get an idea of the size of the waterfall! The name, Niagara, comes from the name of the local people who used to reside in the area. Niagara Falls happens to be a hop, skip and jump away from my home city… one of the reasons for having seen the Falls in every season, may it be spring, summer, fall, or winter. And I must admit, it is the fall season I like the best when the trees are in brilliant colors, the gardens are well-tended, and the beautiful scenery extends beyond the magnanimous flow of water to the fall colors, the orangish-red foliage of the trees and the iridescent floral gardens.
In the winter ice storm of 2013, Niagara Falls looked picturesque as a huge ice sculpture. It was subfreezing temperatures most of the time though fun to hang out. The Maid of the Mist boat ride is a summer event that takes you to the base of the Falls where you are drenched by the mist from the Falls. A thrilling experience, worth a try.

Niagara Falls has been a venue for many publicity stunts. In 2012, Nik Wallenda, a tightrope artist, walked across Niagara Falls on a wire strung from the American side to the Canadian side. That was a major show for the public, broadcast live on national television as well as a great achievement for him. In earlier years, there have been people who have rolled over the Falls or jumped over. In 1901, Annie Edson Taylor survived the experience of rolling over the Falls in a barrel. Sam Patch was the first person to jump over the Falls. Some of these daredevil stunts were staged to garner money. Surrounding this area is the wine country and the provincial town of Niagara-on-the-Lake. It is this town that I always look forward to while visiting Niagara Falls. Not only do I get to taste different kinds of wine from the nearby vineries but also for its quiet splendour and relaxing environment. A Trip to Canada’s Capital City 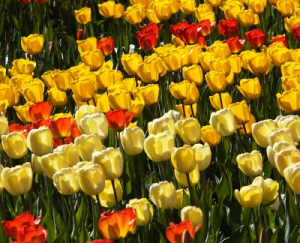 Is it the end of the month already? Where did the whole month go? 🙂 This month’s guest post is by Cux, who talks about her foray into one of the very interesting cities of Canada.

Toronto is a great city… spectacular architecture, a great array of lovely restaurants and a buzzling arts and cultural scene… all add to its charm. But it is the classic international city! Very multicultural and diversified, it somehow lacks a unique identity. Having lived here for a while, I was determined to get around and explore other Canadian cities.

When a couple of my friends from the Czech Republic turned up in Toronto, it was the ideal opportunity to go visit Ottawa, Montreal and Quebec City. These cities were so different in their architecture, culture, signature food, and the outlook of their inhabitants that it was a real pleasure to be there. It was fascinating, to say the least. Ottawa, the main center of the Canadian government, is a quiet, introspective city which mesmerized me with its colonial buildings and Victorian structures. The many walking trails that weave around the city gives one the opportunity to investigate its varied environments. Whether it is the Discovery walk that begins at the Canadian Museum of Civilization on the banks of the Ottawa River, and ends at Parliament Hill, or the walking trails around the Provincial Parks, all of them provide unique experiences. My tour companions were seasoned walkers and helped me keep up my enthusiasm for walking throughout the trip.

The beautiful Alexandria bridge that connects Ottawa to Quebec is a beautiful sight. Ottawa has the most well-kempt parks and gardens. Also, it is home to the Canadian Tulip festival. We saw the Rideau Canal which totally freezes over and becomes the world’s largest skating rink in the winter. The canal was opened in 1832 and is registered as a UNESCO World Heritage Site. The National Gallery of Canada houses the most creative art that I have seen in Canada till date including a landmark sculpture of a spider in front of the building. The sculpture, named Maman by the artist Louise Bourgeois, is among the world’s largest sculptures, measuring over 30 ft high and over 33 ft wide. It is made of bronze, stainless steel, and marble. We sat in for a parliament session as well… it was interesting to watch the proceedings in the House of Commons though we were more taken in by the stained glass paintings and the intricate architecture of the hall! Do take a look…

The Byward market is the happening place in town, lined with posh cafes and shops. Interestingly enough, adjacent to it, was an old old farmers market. This, I thought, was a perfect blend of tradition and modernity. I found the best cookie shop in this market where I tasted cookies designed as Canadian flags.

The friend in Ottawa who hosted us was a good cook and lived in a lovely house in a great locality. He introduced us to homemade maple butter, the next best thing to chocolate. Since then, I am hooked on it.

At some distance from the city, on the way to Montreal, we checked in on Plaisance National Park, which has a beautiful lake and some scenic wetlands, spread across the Ottawa river. That was the best hiking trail of the trip. It felt like walking in the wilderness of a natural forest. Protected by forest range officers, this huge park is good for camping. I hope I can go back there with my family sometime in the future. And my photographer friend captured splendid shots of the floating gardens, open fields, flora and fauna including deer, squirrels, ducks, and beavers.